So Brad Pitt & Angelina Jolie Got Married: What Happens Next?

Elizabeth Landers > Blog > In the News > So Brad Pitt & Angelina Jolie Got Married: What Happens Next?

So Brad Pitt & Angelina Jolie Got Married: What Happens Next?

There IS something about marriage.  However, some people say, “There’s nothing special about marriage, it’s just a piece of paper. It’s just a legal, social, cultural, religious, and financial construct.  And nothing says you have to live differently because of it.” 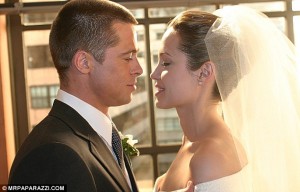 What Does Marriage Mean to Brad Pitt & Angelina Jolie?
With Angelina Jolie and Brad Pitt, it means each one was willing to make a commitment to the other beyond what they’ve already done. They’ve already had children together and Brad has already become the legal father of the children Angelina had adopted. The new commitment of marriage means each one has expressed a further degree of trust in the other.

Although some would say that trust has no degrees. You either trust someone or you don’t.

In this case, the trust has apparently been extended to custody of the children in case of divorce, which is not such a wild idea considering that Angelina has been divorced twice and Brad once.  There have been reports that this was the issue holding up the marriage over the past 10 years in which Brad and Angelina have been a couple.

Custody is Not a Requirement
There is no requirement that a custody agreement be signed prior to getting married.  But since Angelina’s and Brad’s love of the children seems sincere, it is entirely believable that each one wanted to make sure that he or she could remain an involved parent should there be a divorce.  Of course, that issue could have been even harder to resolve should they have never legally married but split up as a couple.

At the beginning of a relationship, especially one that begins with the extreme passion of an affair, people tend not to think of questions like, ‘If we split up and I get laid off and have to move to Guam to find work, how will I maintain my being a parent to my children?”

For Angelina the question she didn’t think of at the beginning could have gone like this:

“I’ve legally adopted my son, Maddox.  I am his mother.  What if Brad and I start to live together and Maddox starts to feel like Brad is his father.  A little boy doesn’t know the difference between being legally a father and being a father in every other way except legally. And then what if Brad and I split up one day?  Do I owe Brad anything in terms of time with his ‘son’? Do I owe my son anything in terms of a continuing relationship with his ‘dad’? Maybe I shouldn’t hook up with Brad until we have an agreement about this.”

For Brad the question he didn’t think of at the beginning of the relationship could have gone like this:

“I’m getting to feel close to Maddox. I’m feeling and acting like his father. What if Angie and I become a couple and start living together?  What if we break up?  How will I feel? How will Maddox feel if the break up means I no longer can be a part of his life?”

In the passion of a new love hardly anybody thinks or acts like that.

With the ecstasy less intense after nine years of living together, Angie and Brad apparently did start to think like that.  There was pressure to do the socially, legally and religiously accepted thing.  There was pressure to confirm their love publicly. There was apparently pressure from the children to become a family with an accepted structure.  And maybe pressure from the children—as Angelina has been reported to have suggested—to have an exciting event where they could dress up, play, be a center of attention and eat cake.

Now they’re married.  They somehow resolved the custody and financial issues, or decided not to resolve them before marriage and just hope for the best for whatever happens in the future.  The pressure to get married, which might have been heightened by Angelina’s diagnosis of being at higher risk of having a sometimes fatal disease, outweighed the worries about the problems of being legally married.

How will this marriage make a difference?

And, in three specific ways, they are just like all of those other relationships:

Why Brad & Angelina Are Different
Bottom line, what happens in many other affairs that begin at work will likely not happen to Brad and Angelina. Here’s why.

In many workplace affairs the man is the one with more power–a higher title, a higher income, more people taking orders from him.

As the affair starts and continues the woman accepts this.  The man says they can’t get together on Thursday.  She accepts this.  The man says the project must be finished by 6PM on Friday and it has to be done a certain way.  The woman accepts it.  In fact, the man’s greater power, his higher income, the admiration and respect he gets from so many people are an attractant to the woman.

During the affair, when everything is secret the woman knows that the power balance has to stay the way it is.  A change could reveal that something is going on.  Co-workers could guess it is an affair.  In fact, a woman trying to get more power, more income, or a higher position in the workplace is often the way trouble starts if her affair partner grants some of those wishes.

Angie and Brad will not face an imbalance of power, or income or status that, in the average affair couple, the woman would find unacceptable once she is married to her affair partner.

Angie and Brad are both superstars making multiple millions with each movie.  They are both in high demand by studios and directors and by the media.

But Angie and Brad have faced and will continue to face all the other changes that marriage brings to a relationship that started as an affair:

These are the challenges that every couple, even superstar couples, face when the relationship started as an affair.